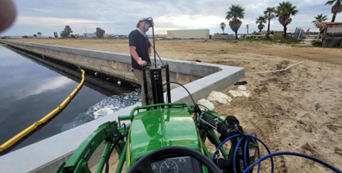 When the Panama City Marina was being rebuilt, the city started with the foundation. Key actions included demoing the cap, replacing the cap, and adding new deadman anchors and tiebacks. Another important item on the agenda was performing injections and sealing up the existing sheet piles that were built in the 1950s. There are joints between each sheet pile, and the objective was to seal and make whole that structure.

The contractor used Prime Flex 920 from Prime Resins to seal the leaks and fill any voids. It’s a single component, hydrophobic urethane with very low viscosity, allowing it to permeate the soil to prevent any type of water infiltration coming in and undermining the underlaying soils for the seawall itself. They injected at every seam to ensure that when the tides fluctuate, there wouldn’t be any water coming in and escaping out – and taking soil with it.

When the material is injected in with the soil, it permeates the soil and follows any imperfections on the back side of the seawall. It was used to seal up the seams on the sheet pile that was driven down many years back, and also seal off any other imperfections that have been created over time. It essentially gives you a new wall, with extra protection behind it to prevent any erosion going in or out. Prime Flex 920 creates an impermeable mass. If there are any tide fluctuations, the material itself will not break down. 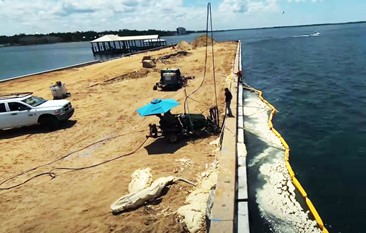 The contractor injected 13,000 gallons of 920 using the probe injection method from 11 to 28 feet on the front face of the T-dock. Prime Flex 920 is inert when cured and can be used with potable water, but the excess foam should still be gathered and thrown away. Turbidity barriers were set up. As the resin sealed the leaks all the way through the structure, some foam escaped to the other side while curing took place.

The contractor used the injection probe method to pump the foam. With the injection probe method, the first step is to determine appropriate spacing and depth placement for injection probes to successfully seal, stabilize and fill the area as shown in drawings. Test sections were used to determine the best probe spacing depending on soil types and conditions encountered. Typical spacing varies between 12” – 48” in each direction and if multiple rows are needed, then each row should be offset half the space distance.

Next, the contractor used Prime Resins soil probes with slotted, reusable drive points to keep dirt from clogging the pipe during driving. Pipes may be placed by a manual driver, a pneumatic driver, auger, water jetter or other method approved by the engineer prior to placement. In this case, a pneumatic driver was chosen.

After choosing the best ratio of catalyst to grout, the contractor determined the amount of grout needed for each probe to ensure all locations within the work area are fully grouted. They also checked for voids using a probe. Next, grouting began using the “Lift Grouting Technique”.  This is where the pipe is raised or jacked up and grout is injected in 12”-18” intervals or lifts. The contractor determined the amount of grout injected as well as injection pressures at each lift based on soil conditions for that area.

Finally, the contractor continued pumping to the point of refusal when grout was seen sealing the wall through to the water side. Lastly, they ensured that weep holes/drain holes were free of grout. If no weep holes were present, the contractor would have installed a drain hole with a filter.

This phase was completely successfully, and the City and FEMA’s Project Development Team continue working together to finalize the amount of eligible funding for further rebuild of the Panama City Marina and Ship Store.