Defects in seawalls allow water to travel through or under the wall. This water movement can cause erosion, resulting in soft, unstable soils or large voids. The structural integrity of the seawall depends on the fill soils behind and beneath the seawall. Erosion compromises the structural integrity of the wall, and can also endanger adjacent building foundations, thus threatening public safety.

View of Settlement in the Courtyard (Notice “V” in Elevation)

Some repair methods require frequent refilling of the voids with new soil, which is costly long-term and requires constant monitoring.

Porto Venezia Condominiums sit on one of the many canal systems in Ft. Lauderdale, Fla. The condominiums’ narrow courtyard — only 25’ wide between the building and approximately 200 linear feet of seawall — experienced settlement and soil loss behind the wall. The erosion caused water to pond in the courtyard. The adjacent swimming pool, added later and built on auger cast piles, did not show signs of settlement. The pool did, however, complicate access and crowd the surrounding ground with shallow depth conduit.

In addition, the existing storm drain system in the courtyard was ineffective, particularly at high tide due to a high water table and infiltration through the seawall. Water was always in the drainage system; therefore, when it rained, the storm water had nowhere to go. Worse still, cracks in the building’s stucco facade revealed that the erosion affected the compaction of soils underneath the building’s foundation.

General contractor Mike Wattner of Perfection Roofing & Construction and engineer Bill Mathers knew something had to be done. After viewing a video online of a seawall repair in Ormond Beach, they contacted an experienced subcontractor. The video showcased soil stabilization behind a seawall using Prime Resins’ Prime Flex 910, a single-component polyurethane resin that creates a rigid foam when activated.

Due to the proximity of existing structures, limited access and tidal fluctuations, removal and replacement was not feasible. Replacement would cost a fortune, take a long time and disrupt life for the residents. In addition, this would put the adjacent foundations at greater risk. Finally, the seawall was in relatively good condition; it just needed some well-placed fortification to seal defects in the joints and under the foundation. 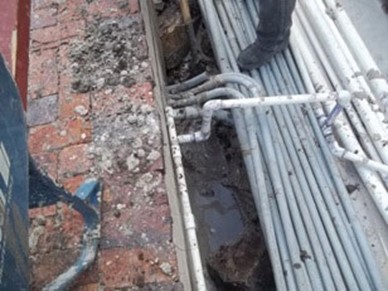 Learn more about seawall and bulkhead repair with Prime Resins.

Diagnosis
Following assessment, it was clear that accumulated ground and storm water was travelling underneath the seawall and through its joints and minor defects. The water loosened and washed away soil. Because loose soils are more permeable, water enters and leaves more readily, which leads to larger voids and the potential for catastrophic failures of the seawall and adjacent foundations.

For this project, permeation grouting was needed, therefore, Prime Flex 910 was used. Permeation grouting densifies loose soils without displacing them. This reduces the chance that excess pressure could be directed at the seawall or adjacent structures causing damage or complete failure. The low viscosity resin is introduced into the soil slowly and allowed to soak in. Ground water activates the resin and it expands slowly, driving itself deeper into the soils where it cures into a homogenous mass. Any loose soils encapsulated by the grout are immobilized and water can no longer move through the soil. This expansive grout naturally follows the path of least resistance just like water. Any secondary defects in the seawall are sealed as the foam expands. 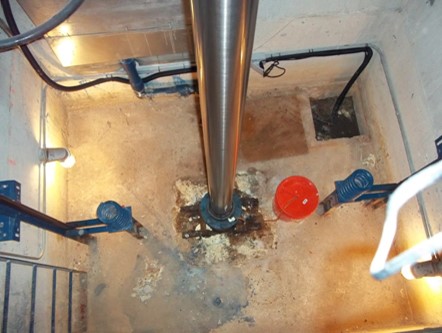 Working closely with a technical consultant at Prime Resins, they made a grouting plan for the project.  Two rows of grout columns, offset from one another, would be needed along the length of the sea wall. Grout injections would extend 3 feet beneath and 2 feet above the foundation of the sea wall to interrupt the flow of soils from under the wall. (This was later extended to 4 feet below and 2 feet above.)

The result is a 5- to 6-foot thick impermeable mass of grouted fill material that extends 4 feet below the foundation of the wall. Consequently, the grout wall now supports the seawall and prevents water from eroding soils through its defects. The installation took longer than expected due to the excavation necessary to place the probes, but was still completed in less than ten days. 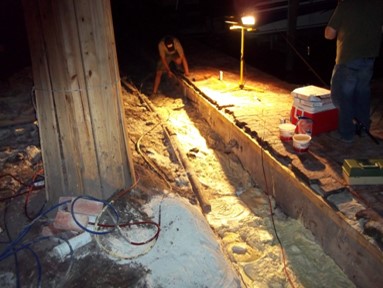 The crew worked around tidal flows

The seawall was stabilized and erosion stopped with a method that was faster, cheaper and less disruptive than conventional construction or replacement.