Hurricane Matthew left a path of destruction in its wake up the East Coast. North Carolina was hard hit by storm-related flooding. Waters continued to rise in the days after the storm as flood waters receded elsewhere, draining to lower points. That included Lumberton, N.C., located 70 miles southeast of Wilmington in the coastal plains region of the state.

Approximately six miles north of Lumberton there is a triple barrel box culvert under I-95. Each barrel is 12’ x 12’, so essentially there is a 36’-wide culvert under the highway. Storm-related flooding caused a major washout underneath the inlet end, leaving a huge void threatening the culvert’s integrity. That, in turn, would lead to a compromised highway in the long run. The North Carolina DOT completely shut down I-95 there for a time due to flooding. When flood waters receded, just one lane opened; the lane above the void remained closed.

NCDOT tried filling the void in-house with cementitious grout over a weekend, which was not successful. That Monday NCDOT officials hired one of its contractors, Applied Polymerics, to solve the problem. They opted to fill the void with Prime Flex 985 LX20 Fast, a highly expansive two-component polyurethane. The Fast formulation reacts in 12 seconds versus 68-70 seconds and reaches full rise at 65-85 seconds.

“We needed to use LX20 Fast because we needed it to set up quickly, otherwise the water current would have just washed it away,” said Scott Kammerer of Applied Polymerics. “We like 985 because of its structural capabilities.”

Applied Polymerics lived up to its promise: “Whatever It Takes.” That evening one of its crews picked up material from Prime Resins just east of Atlanta and started work on Tuesday morning with a second crew.

The flood level of the water created a nearly impossible work site, essentially an underwater grouting job. To preserve as much material as possible and to ensure the grouting technicians didn’t have to work in chest-high water, they installed a cofferdam of corrugated pipe. They secured the pipe with joists against the culvert ceiling and sealed it at the bottom. 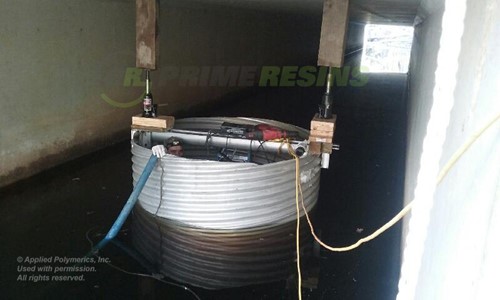 “We worked closely with the DOT,” said Kammerer. “We worked with their dive team on the cofferdam and the DOT provided a crane. Crew members from the DOT were there nearly all the time we were. It was a good partnership.”

“The manufacturer came through with material as needed—it was always there on time,” said Kammerer.

Crews filled the void and NC DOT officials opened I-95 to normal traffic. 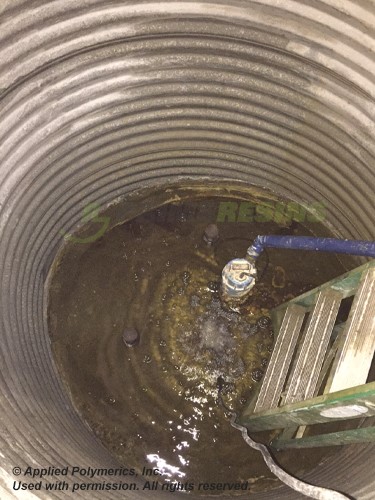 A cofferdam sealed at the bottom minimized the flood waters so techs could inject polyurethane grout under the culvert to seal the massive void.

Void fill under bus loop with 920