The stable light of Cleveland harbor shines on 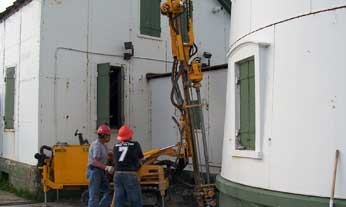 Built in 1911, the Cleveland West Pierhead Lighthouse is a conical cast iron tower incorporating a "keepers" quarters and fitted with a Fourth order Fresnel Lens. For over 100 years it has provided ships guidance to the Cuyahoga River bringing important jobs and materials into and out of Cleveland. Cleveland has relied heavily on the docks that line the Cuyahoga River moving such materials as cement, iron ore, stone, sand, salt, steel and machinery.

In 2002 staff engineers and a survey crew from the United States Army Corps of Engineers (USACE) evaluated the condition of the arrowhead breakwaters and associated structures (light houses). The pierheads were built around 1910 and were constructed using large stone filled timber cribs with massive concrete caps around the perimeter. The overall dimensions of the west pierhead are 100 feet X 60 feet and support a lighthouse owned by the US Coast Guard.

Survey and studies showed the west pierhead was in poor condition. Metal and wood timber bracing and wood cribbing show signs of severe wear and deterioration that needed to be addressed. Continued deterioration of the cribbing could result in further loss of fill and a weakening of the structural stability of the pier head. Lake Erie, time, and weather had taken its toll on the lighthouse and Fog House structures.

Further inspections were made as plans were made to design and fund the necessary work. By 2008 the degree of tilt in the lighthouse structure was 1.4 degrees. In 2008 a bid package was put out to bid for sheet pile encasement, infill, new deck slab and parapet repairs.

Concerns about vibration from the sheet pile driving operation potentially causing a shifting of the rock fill under the lighthouse causing more tilting (or worst case causing a total tipping over) an addendum was added to the project for stabilization of the rock fill prior to any other work. Plans called for the stone fill under the foundation of the lighthouse to be injected with "structural foam" Prime Flex 985 LX10 a minimum of 6 feet wide and to a depth minimum of 1 foot maximum of 5 feet into the interior wood framing of the timber crib structure. The resin would fill voids and flow into voids between the stone to create a structural foam and stone pillar beneath the lighthouse to create a "ring" of support and transfer all vertical loads from the lighthouse and its foundation to the existing timber crib and stone fill. Hole spacing, placement, grout quantities we to all be determined by the contractor and a plan submitted before work could begin. Plans also called for a stringent monitoring plan with surveying equipment and a daily log recording several points on the lighthouse in xyz coordinates. Readings were required ranged from continuous to twice daily depending on the work phase being performed. This was to be done throughout all work until acceptance from the USACE.

TAB Construction Co, Inc. was awarded the project in October of 2008. This included stabilization, sheet pile encasement and ancillary work.

Stabilization grouting with Prime Flex 985 LX-10 was performed by subcontractor Geotechniques, Inc (Buffalo, NY) starting in June of 2009. 4 Inch core holes 22 feet down were drilled using a Beretta Model T-46 drill rig. Holes were drilled every 28 inches around the circumference of the lighthouse. The first 8 feet or so were thru the concrete caps, then 14 feet into the stone and wood timber cribbing. The high density, two component polyurethane structural foam grout was placed using the down hole method of placement. Grouting began at the deepest depth and was placed in reverse lifts at 1 foot intervals injecting a predetermined amount of resin. The grout zone was from -19 stone fill to -8 (concrete deck underside) The USACE required "grout verification holes" be drilled at locations selected by an USACE Field Officer to validate the grouting process. Additional grouting was required in some areas. Due to space and handling constraints the resin was delivered in 330 gallon tote containers. Each set comprised of 1 tote (330 gallons) each of component "A" and "B" for a total of 660 gallons per set. Delivery to the site was by barge and set by crane onto the pierhead. A total of 2640 gallons was delivered to the site and injected. 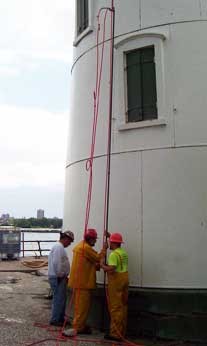 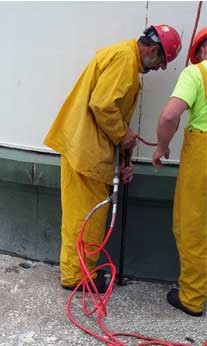