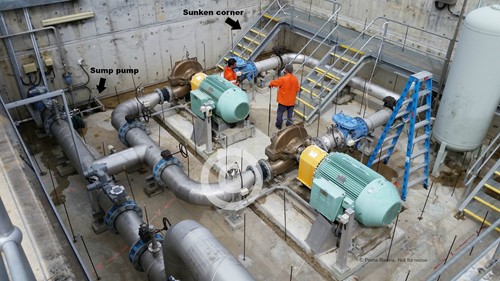 Problem:  The Quakers Hill wastewater treatment plant features a concrete pump pit that is approximately 20 feet (7m) deep with 16” (40cm) thick walls and floor. There are a series of pumps in the pit that transfer water from the digesters to other tanks. The floor of the pit is sloped to send rainwater into a sump pump located in one corner of the pit. The whole pit had settled slightly in the other corner on the same end of the pit as where a sump pump is located. Because the other corner had settled, rainwater was collecting instead of running to the sump pump.

Solution: The contractor proposed using polyurethane foam to address the cause of settlement, fill any voids present and lift the structure. Sydney Water officials required a manufacturer’s rep on site prior to work beginning. A Prime Resins technical consultant was present to train the contractor’s crew on site, serve as our rep, and give a presentation to officials on our chemical grouts.


There were two phases to the job:

Analysis revealed a weak substrate below the pit, so phase one was to consolidate the soil underneath the entire pit by permeation grouting with Prime Flex 920, a hydrophobic, super low viscosity polyurethane that reacts with water and expands to form a closed cell, watertight, rigid foam. Due to its low viscosity, 920 is used, as in this case, for permeation grouting of loose soils to consolidate soil particles and increase the load-bearing capacity of a structure. The crew injected resin at a depth of 3 feet (approximately 1m) underneath the entire pit to strengthen the substrate.

Phase two was filling a slight void underneath the sunken corner and a few areas around the sump itself and lifting the sunken corner. The team had used a rotating laser level with transits to determine the required degree of slope to restore the flow of rainwater. The void filling and lifting was done with Precision Lift 4.0#, a highly expansive, high-density polyurethane foam that provides hydraulic lift. The corner was lifted about ¼” (6-7mm)—the amount called for in the laser survey. Both Prime Resins products were made at our facility in Melbourne.

Outcome:  The lift was successful and the flow of rainwater to the sump pump was restored. It so happened that it rained throughout much of the job, so the crew was able to see for themselves the rainwater properly flowing. 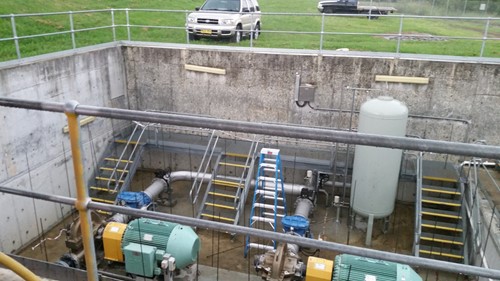 This provides context of how deep the pit is and how thick the walls and floor are.
(Photo copyright Prime Resins, Inc. Not for reuse.) 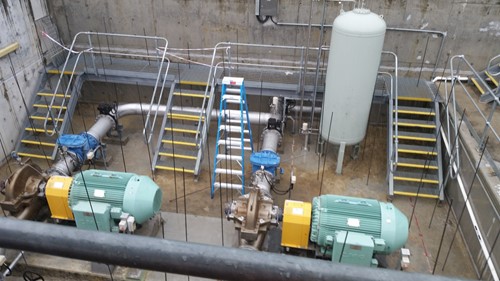 Probes are in place for permeation grouting with Prime Flex 920 polyurethane grout.
(Photo copyright Prime Resins, Inc. Not for reuse.)

Sinkhole repair at busy port with 920