A brick and stucco lighthouse, built in 1812, stands on the southern point of North Island, a 30-minute boat ride off the coast of Georgetown, S.C. After nearly two centuries of service, the Georgetown Lighthouse continues to be an important navigation aid for the shrimp boats and pleasure craft that travel out of Winyah Bay through the narrow channel between North Island and South Island. Despite many years of assault by sea air, wind, and rain, the historic lighthouse is in remarkably good condition. 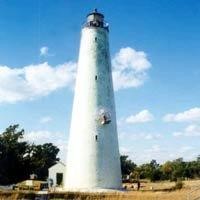 Problem
During a routine inspection in preparation for repainting, the Coast Guard found a few exterior cracks, areas of delaminated stucco and a handrail that needed to be replaced. They also identified a more serious condition that needed immediate attention. The brick and mortar foundation showed signs of deterioration caused by constant contact with salt water in the surrounding soil. Apparently, during storms, rain and salt spray would pelt the lighthouse and run down the sides, permeate the sandy topsoil and accumulate next to the foundation.

Solution
To stop the deterioration of the foundation, the Coast Guard engineers specified a technique called “curtain wall grouting.” This involves injecting a polyurethane grout completely around the structure to create a waterproof barrier. The specifications for this project called for injecting Prime Flex 910 through soil probes driven 30 inches into the ground, spaced 30 inches apart. 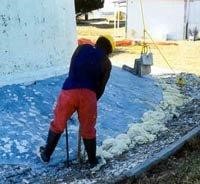 Prime Resins provided onsite technical installation assistance. When injection started, the Prime Resins rep noticed that the specified 30-inch depth for the soil probes was too shallow to allow sufficient horizontal migration of the grout. Most of the grout was following the path of least resistance upward through the drier sand, and alongside the probe pipe. It also became apparent that the specified distance between the probes was too great for the grout to migrate to the grout from the previous probe. To ensure a good watertight curtain, the rep recommended changing the depth to five-and-a-half feet and the distance between probes to 18 inches.

To stop the grout from flowing back up alongside the probe pipe, he suggested that at each new probe the crew start by injecting a small amount of Prime Flex 910 with 5% catalyst and then waiting about 90 seconds. The grout traveled up a short distance alongside the probe, cured and created a gasket around the pipe. When they resumed injection, this gasket forced the rest of the grout to migrate outward into the surrounding soil. To ensure complete protection, the rep recommended that they repeat the process with the injection probes midway between the first set of probes.

General Materials supplied Prime Bond 3100 and Prime Gel 2000 to complete the other repairs. These products were used to repair the cracks and reattach the delaminated stucco.

Stabilizing a sinking highway with 920