After a successful highway stabilization project in neighboring Alberta, Martech president Glenn Votkin recommended the injection of chemical grout—in this case Prime Flex 920 polyurethane resin from Prime Resins. The resin would fill voids and stabilize the substrate behind and beneath bridge abutments. Martech matches infrastructure repair specialists with government agencies to find innovative solutions for their repair needs.

“In this case, [New Shield president Larry] Graham worked with the Ministry and Martech to design a mitigation technique that would fill voids and stabilize loose soil with minimal expansion, and used a hydrophobic formulation that would not degrade when exposed to water – in fact, moisture in the surrounding soil is required for the resin to set… The idea is to fill voids in such a way that subsequent inflows and leaks are diverted and prevented in ways that eliminate any future erosion.” Chemical grout injection avoided extensive excavation, fabric layer installation, filling and repaving. 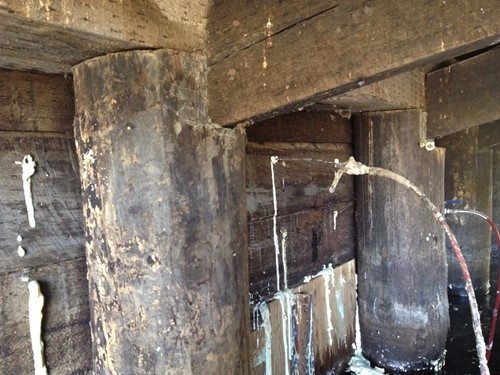 The genius part of the project? New Shield chose to inject the grout from underneath the bridge, allowing the roadway to remain open throughout the project. The hard cost of the project was comparable to a traditional replacement project, “but there was a big advantage to the public – user costs don’t show up on our bottom line, but avoiding traffic closures would save a lot of time and inconvenience for the people we serve,” said ministry bridge preservation engineer Brodie Thompson, P.Eng to the magazine.

Road authorities across North America face a major problem with crumbling roads and bridges. Injection resins offer a much faster and less disruptive option for repair and renewal.