The client is a major beverage manufacturer in Brazil. One of its plants in the state of Minas Gerais experienced settlement of the floor under tanks full of 30,000 liters of liquid (nearly 8,000 gallons). The tank, supported by four legs, sits on a concrete pad. One corner had settled about 2 inches; thus, the tank was leaning away from its neighbor slightly. The facility manager was concerned that further settlement that would undermine the integrity of the floor and the stability of the tanks. Exploratory holes and a cut out revealed a 1-inch void under the slab. A second area under a heat exchanger also settled due to a void. 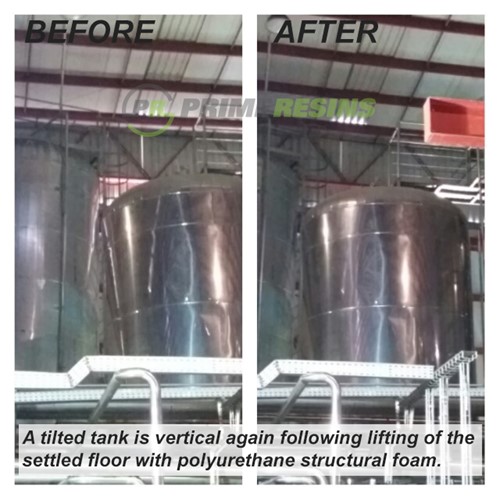 How they did it:

Our technical rep recommended an injection pattern that would essentially create a dam with cured grout around the lift site. Technicians drilled and injected a hole pattern in a line adjacent to the tank to create a foam barrier so that material would stay under the area that needed lifting. They drilled and injected two additional holes on the other side of the legs beneath the tank with long, slow shots to create a dam on the other side. Next, they injected one hole equidistant between the two legs on the settled side. Then they lifted one corner of the slab about an inch.

The on-site engineer decided to stop at this point because the slab was only about 5 inches thick, so he worried about breaking the slab. In addition, the base of the tank shifted slightly during the lift and he didn’t want it to move further. He knew that the void was filled, and the 1-inch lift was enough to stabilize the tank to his satisfaction.

The crew injected a second location under a 2000-lb heat exchanger and lifted it 4- 5 inches (10-12 cm) back to level with no complications using Precision Lift 4.0#. Then they tackled a third location: a simple soil stabilization and void fill using Prime Flex 920, a hydrophobic structural polyurethane foam. They created a base of cured 920 that compacted the soil and then filled the void above it as preventive maintenance to avoid settlement problems down the road. 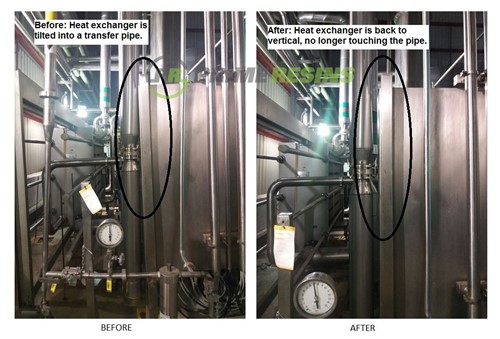 Thankfully Merco stocked more material than they expected to need because an emergency project cropped up while they were on site. Six months previously during the site assessment, they explored an area near a floor drain. They did this because that type of location had settlement problems at another of the bottler’s facilities. No issues were found at the time: There was good soil compaction and no visible void.

Now, however, there were three cracks in the concrete floor converging at the base of a structural support column. They could see a slight dip in the floor just looking at it without any levels. The engineer consulted with facility management who immediately gave permission to stabilize the soil and fill the void. The crew angle-drilled holes and used 13-foot (4-meter) probes to get underneath the base of the pillar. The void was so big or the substrate so soft that they pumped 80 gallons of Prime Flex 920 until refusal.

The crew fixed all areas of concern plus the emergency location to the engineer’s satisfaction. The client was pleased. Perhaps the best part for the client: Crews did all the work with zero shut down time in production.

This was the second project Merco Geopolímeros did for the same client. Consequently, the facility engineer asked all the company’s engineers to follow the project via WhatsApp updates he provided.

“The facility engineer told his colleagues this was a great opportunity to see something revolutionary in Brazilian engineering,” said Romeiro, partner and director of commercial operations for Merco Geopolímeros. “The client was full of praise and thanks for the results.” 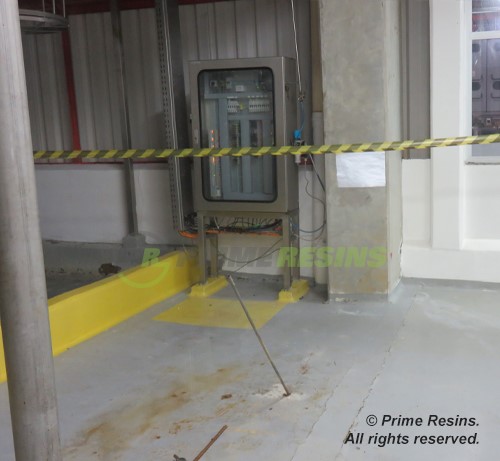 The only alternative at this point was to move equipment, remove the concrete, compact the soil, and replace the concrete. Facility managers had already tried mudjacking with flowable fill, but that failed. The weight of the cementitious fill only aggravated the problem of a weak substrate and settled again soon after.

The hard cost of replacement materials and labor would be cheaper. However, the lost productivity that a plant shutdown would require to do that would cost hundreds of thousands of dollars.

Void filling and slab lifting with foam were a far more economical option in the long run.