A bank branch located in a shopping plaza had problems with a sinking floor. Contractors mudjacked the floor twice before, but each time the floor sank again. There were visible gaps under walls and counters. Wood blocks supported counters to keep them near level in places where the floor sank 4 inches. The entire footprint of the bank had some degree of settlement, ranging from an inch to 4 inches. 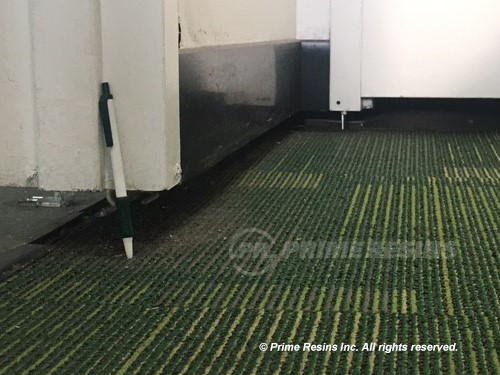 Mudjacking was clearly not the answer, so the Prime Resins contractor proposed leveling the floors with Precision Lift 4.0# polyurethane foam. The contractor also does mudjacking, so he could easily have proposed another round of that, but obviously that was not solving the problem long-term. 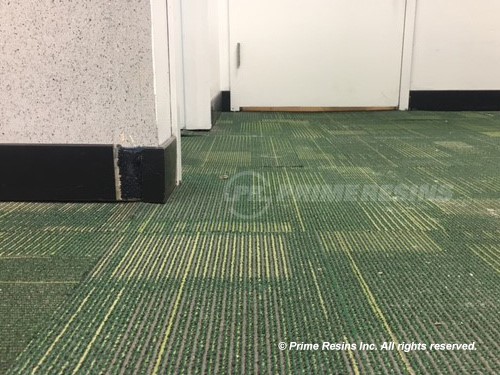 The contractor conducted a site survey with ground-penetrating radar to identify the size and location of voids and any obstructions below the floor. Armed with that map and on-site technical support from Prime Resins, the crew went to work overnight while the bank was closed.

The crew identified zero level as the target for the rest of the floor. They used a zip level to measure all the lift areas from the zero point. Then the crew mapped a drill hole pattern with holes 4 to 5 feet apart in staggered rows. They removed the carpet squares where possible and drilled through in other places. The drill holes are only 3/8” –dime-sized–much smaller than mudjacking holes.

The lift went better than expected. Crews achieved lift quickly at most hole locations. Those with larger voids took a little longer. The technicians are experienced mudjackers, so they understand the principles behind the work, including hole location. This also meant, however, that they were unaccustomed to waiting for lift as the foam reacts, so that took a little getting used to, but they caught on quickly and loved the results.

Some of the carpet squares were difficult to remove—another contractor was supposed to do that—so they simply drilled through. The bigger challenge was working with a lifting rig from another manufacturer. The crew had received little training from the manufacturer and had heat settings wrong on the main pump. The pump also is not as robust as the PMC proportioners that Prime Resins recommends. The crew did use the Equalizer gun from Prime Resins, an easy-to-use and easy-to-clean impingement gun with no O-rings, which they liked.

The crew lifted the entire floor of the bank to level over two nights. The process was minimally disruptive to the bank. Aside from a follow-up cleaning by the bank’s cleaning contractor and regluing some carpet squares, the branch was ready for business. 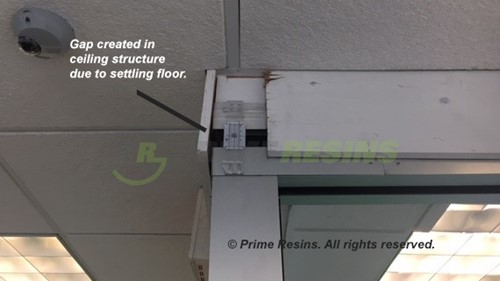 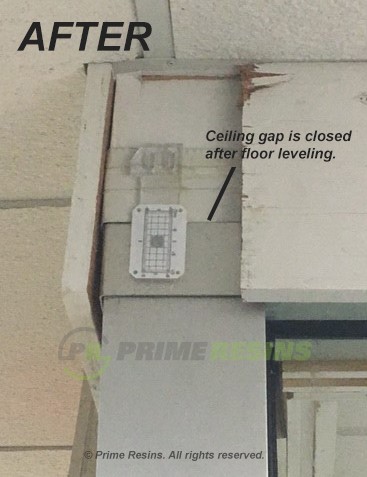