On Old Redwood Highway (US 101) in Healdsburg, California, commuters were noticing that approach slabs were sinking. There was a noticeable drop and the typical ‘thumping’ associated with the uneven sections. The drops were as large as 2” in some places. The California Department of Transportation sought to fix the uneven slabs as well as stabilize surrounding soils under neighboring panels.

While bidding to secure the job, contractors with Case Pacific were simultaneously ensuring that their crews would be as efficient as possible with the best equipment for the job. Two employees visited Prime Resins to view pump options. They also attended a Prime Resins Chemical Grouting Institute while in town to receive both classroom and hands-on refreshers.

Not only did they head home equipped with the lessons learned in the class, they also took actual equipment: two new Prime Resins Professional rigs. Due to the size of the job and constraints of available working hours (10:00PM-4:00AM), the rigs were necessary to keep two crews running at optimal speed. The rigs have the material and pumps on board and are also equipped with calibrated flow sensors for monitoring exact material consumption. 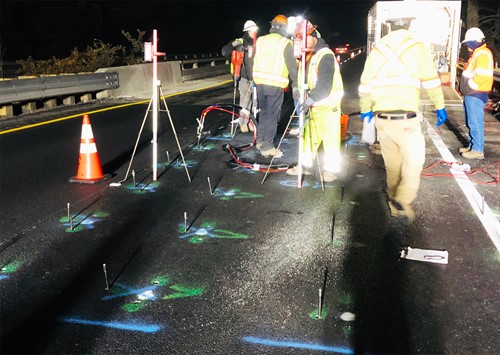 The project required the injection of Precision Lift 3.0 under both left and right lanes on both the north-bound and south-bound sides. Crews only needed to close one lane at a time while working, leaving the other fully open to traffic. For the slabs that needed to be lifted level with neighboring panels, the Precision Lift 3.0 was able to lift to an accuracy within 1/8” of the desired elevation. For further stabilizing the surrounding soils, DCP testing showed that soils were soft between the 7 and 12’ marks. Injections were made in 3 zones at 15, 10 and 5’ depths. Follow up tests confirmed that these areas were solidified post-injection.

Overall, Case Pacific was more than satisfied with their decision to use Prime Resins trailers and Precision Lift polyurethane foam.