A wooden bulkhead along a creek was in danger of failure. Huge sinkholes had formed, creating voids under the adjacent driveway. Prime Flex 920 filled the voids and Precision Lift 4.0# lifted the driveway slabs back to level.

The homeowner has a 10-12-foot high wooden bulkhead on a creek running through his property. The bulkhead is about 10 years old. Access to the house is via a wooden bridge across the creek with concrete driveway before and after. As a result, the driveway sections are effectively bridge approach slabs.

The structure sits at a gentle curve in the creek, so the flow of water hits the bulkhead at one corner of the wall. The flow of the creek hitting that spot over time caused erosion that washed out soil under the wall. The result was a sinkhole behind the wall and adjacent the driveway. The sinkhole was 3-feet wide and 4-feet deep and further stretched underneath his driveway. For whatever reason, the diagonal corner on the other side of the bulkhead experienced similar erosion and a resulting sinkhole. 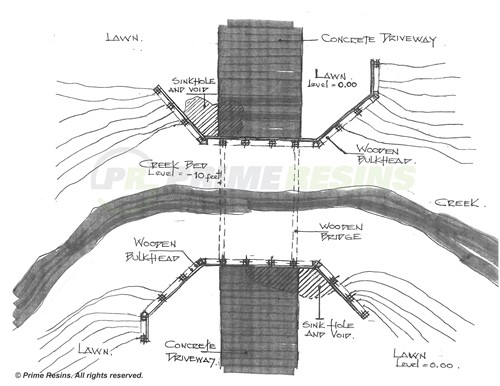 The contractor had three jobs: stabilize the soil behind the wall and seal penetration through the bulkhead to prevent further erosion, fill the sinkholes, and fill voids beneath and then lift the driveway slabs on either side of the bridge. They opted to use structural polyurethane foams from Prime Resins to do the work.

“We chose chemical grouting because the homeowner did not want to excavate anything,” said the contractor. “With [Prime Flex] 920 you are limited only by the length of your probe. It is versatile in terms of getting it where you need to underground without excavation.

“We chose Prime Resins because you brought the knowledge and support that we needed to do this project.” Prime Resins provided on-site technical support and training for the project.

How they did it:

Step 1: The contractor, with on-site technical assistance from Prime Resins, curtain grouted behind the bulkhead with Prime Flex 920 structural polyurethane foam. Techs injected foam through a series of probes along the wall 6-10 inches back from the wall. 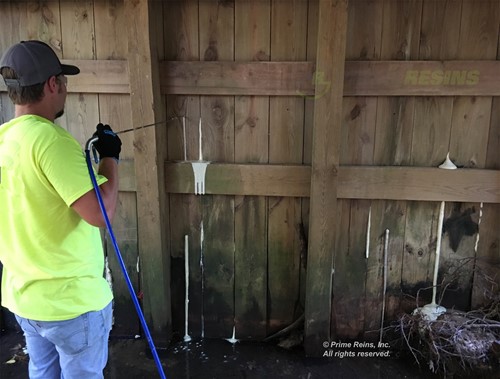 Step 2: They also injected foam through probes along the sides of the driveway and through ports in the face of the bulkhead to fill voids and permeate the loose, sandy soil. The result is a rigid, watertight mass that prevents future erosion. The foam permeated through the almost tongue-and-groove slats of the bulkhead to seal future creek intrusion.

Step 3: Next, they had to fill voids under the driveway and lift the slabs back to level with the bridge. One side had dropped 1 ½” and the other side had dropped ¾”. The crew drilled seven holes in a 2-3-foot offset pattern with one row of four holes and a row of three holes. They injected Precision Lift 4.0# structural polyurethane foam. This filled the voids and lifted both slabs back to level with the bridge. 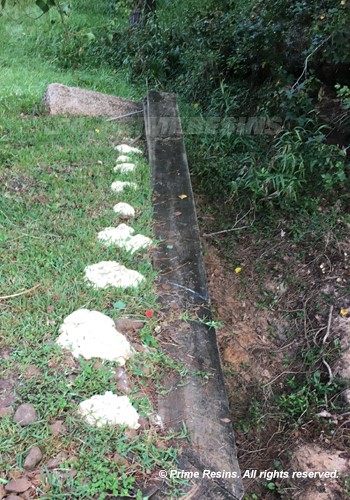 Step 4: The homeowner filled the sinkholes with backfill after the chemical grouting was completed.

A previous “repair” to address the failure of a support post meant they had to work around metal poles and lumps of concrete. (When the bulkhead originally began to fail, the homeowner stacked bags of concrete alongside the bulkhead and drove metal pipes through the stack.)

The only real alternative was to replace the bulkhead altogether. This would have cost about $60,000. Also, that would make the house inaccessible by vehicle for the duration of the rebuild. The homeowner solved his problem for less than a quarter of the cost of replacement.

The job was a complete success. The work took two days to complete and the owner was able to access his home via the driveway as needed. The homeowner was happy to have his problem solved without losing vehicle access to his house for days or weeks at a time. 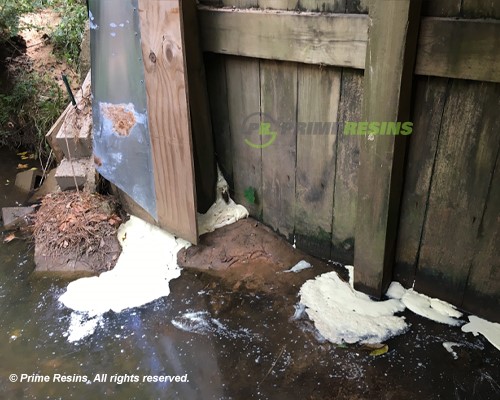 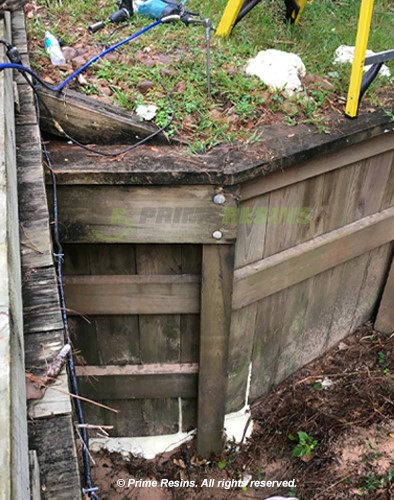 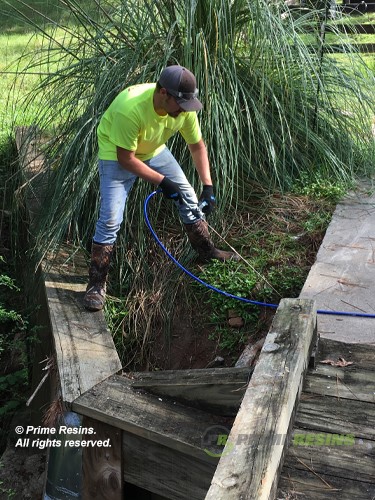