Problem: The relatively new owner of a home on popular Lake Harris (Lake County, Fla.) returned from a weeklong vacation to discover that a section of her yard adjacent to the seawall was caving in. The seawall is only 15 feet from the foundation, so the distraught owner was afraid her house was going to fall into the lake. She hired Foundation Professionals of Florida to assess and repair the situation. A number of issues needed to be addressed. Inspection revealed that the mortar joints in the concrete seawall were giving out. Where the depression in the yard was, you could see the water breaking through cracks in the wall. To further aggravate that situation, a downspout from the gutter was dumping right into this depression as well, so they also installed a downspout from the gutter system that vents past the seawall. 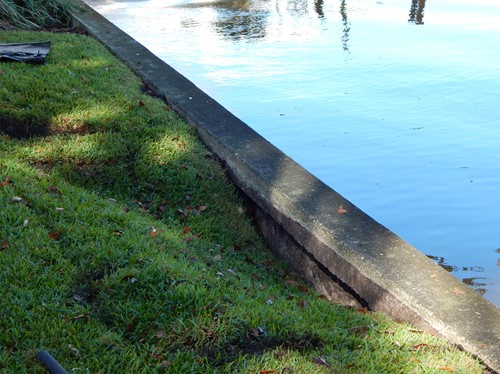 Probing revealed that there were a number of voids underneath the lawn. “When we started removing the grass, we almost lost a shovel,” said Daniel Stagg, general manager of Foundation Professionals. “Under the root mass, there was a big void.” Ultimately the void stretched from the seawall to about half way to the house.

Solution: Foundation Professionals used about 250 gallons of Prime Flex 920 to fill the voids and seal the cracks in the seawall. The 920 is a hydrophobic, single-component polyurethane resin that is activated with a catalyst (Prime Kat or Kick Fast Kat) to create a watertight, rigid foam. The added benefit of 920 is that it is independently tested and verified to meet NSF/ANSI Standard 61 for contact with potable water, an important environmental consideration given the location on Lake Harris. 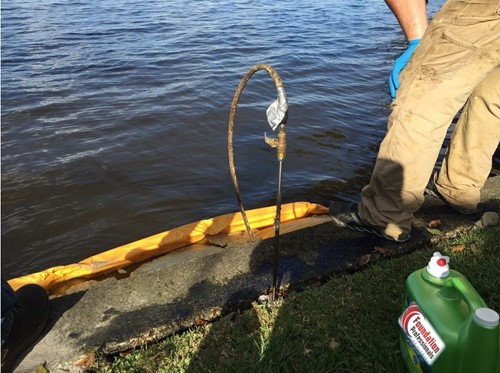 “We chose 920 for ease of use, because of the wall’s contact with the lake, and its low viscosity allowing thorough permeation of soils. Plus it’s a proven product we trust and depend on for these projects,” said Stagg.

Additionally, weep hole drains were installed in the seawall once grouting was complete to allow relief of hydrostatic pressure on the land side of the wall. The weep hole drains allow movement of water but stops the migration of soil via an internal filter system.

What was the biggest challenge or surprise? As the project was wrapping up, a second depression began to develop, revealing another void approximately 8 feet west of the initial void. This was caused by the original downspout water infiltrating the soil. The area was excavated, backfilled with clean fill dirt, and injected with Prime Flex 920 to ensure stabilization. Outcome: “Our technician is a master at this,” says Stagg. “He’s really patient and dispensed the grout low and slow and let it really penetrate the voids to ensure we had them filled up completely.”

The work was completed in two phases with 75 feet of seawall sealed and two major voids in the yard filled. “The homeowner is very happy with the results,” says Stagg. “She isn’t worried about her house falling in the lake anymore.

“The best part for us is having the ability and expertise to provide the best, long-term solution to this issue and that we were able to deliver on the homeowner’s expectations and her faith in our abilities.”

Alternatives: The homeowner had a couple of other options. One neighbor recommended dumping bags of Quickrete in the hole to “stop it up.” But realistically she had two options besides permeation grouting. First would be to fill the void with soil and wait and see what happened. The second option would have been to excavate the back of the wall, install filter cloth and backfill.

“Both options were temporary and may have only lasted days or weeks before failing and causing seawall collapse or worse, foundation collapse on the house,” said Stagg. The homeowner requested information and references on why those solutions would not work and how our process did work.” 920 is inert when cured and can be used with potable water, but the excess foam should still be gathered and thrown away.