Problem:  A leaking 135’ seawall on the Intracoastal Waterway in Delray Beach, Florida, needed extensive repair to reverse the damage caused by years of erosion. Some of that erosion was under the adjacent pool deck, causing it to begin collapsing in areas. The job involved sealing leaks, extensive void filling, soil stabilization and slab lifting. Solution: All the grouting work was completed with just two Prime Resins products:

The construction company owner and his colleague attended two days of training at Prime Resins headquarters in June in preparation for this job, but also engaged Prime Resins’ on-site technical assistance. “Having David Dingler on site was invaluable,” said the foreman. “We learned a lot at the training, but there’s only so much you can absorb. Plus David trained our third guy on the spot who now knows as much as we do.

Having such a big job for their first grouting experience was a bit of trial by fire, but the contractor is glad it turned out that way. “I wouldn’t have it any other way,” he said. “I’m glad it was a big job. We ran into every snag imaginable, and David was there to help us work through them, so it was a great learning experience. The technical support was the most valuable part of the job. Learning the most important aspects of grouting—void filling, sealing leaks, soil stabilization and slab lifting—all in one job was great.” 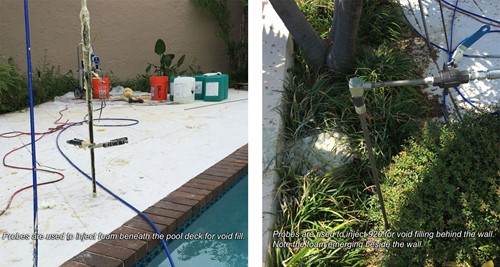 Alternative options:
The homeowner had two other options: excavation and replacement. Quotes for excavation repair of the seawall ran around $150,000, which didn’t even include backfill. Plus half the small backyard would have been destroyed. As for replacement, price wasn’t the only consideration. Given the property’s location on the Intracoastal Waterway, six to eight months of permitting would have been required prior to work beginning. The owner would be looking at a year before he could dock his boat. And the cost? Anywhere from $350,000 – 500,000. The grouting was about two thirds the cost of excavation repair.

Outcome:
The grouting was successful on all counts. Ultimately, two properties were saved: the leaks were so extensive that grout migration ended up grouting part of the neighbor’s seawall as well. The contractor will build the owner a 70’ dock with a lift off the seawall for the owner’s yacht. The chemical grouting sufficiently reinforced the wall so that no further strengthening is needed prior to dock construction; a strength test approved the seawall’s ability to support the dock. In some places behind the seawall they injected grout as deep as 12 to 13 feet through probes. The voids beneath the pool deck were filled and the slabs lifted. The lightweight polyurethane foam is the perfect solution in this scenario. Cementitious grouting, i.e. mudjacking, was not possible with the limited access and with the erosion issues. Cement slurry is too heavy for that situation.

What was the biggest challenge?

“The fact that it was our first grouting job and the scope of everything we had to do. The amount of natural obstacles—trees and shrubbery—was also a challenge. Plus the amount of water rushing under the pool deck was eroding so much soil,” said the contractor.

Would you do anything differently?

“Not really. Though we underestimated how long it would take and how much material it would take due to the extent of the voids. And we would buy the pump you recommended rather than the cheaper one we got. We burned up three of them doing this job.” (We recommend a Titan 640 or better for significant grouting jobs. In addition, they used our Revolution compact slab lifting system for the pool deck void fill and slab lifting.)

“We are very, very pleased with the support we got from Prime Resins. It was invaluable. You sharing your expertise helps us and helps everybody who uses your products.”
— The foreman for the contractor 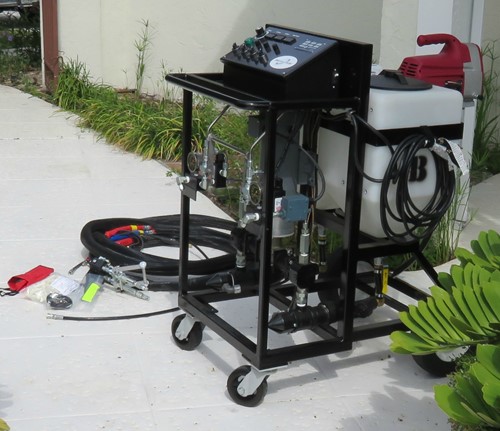 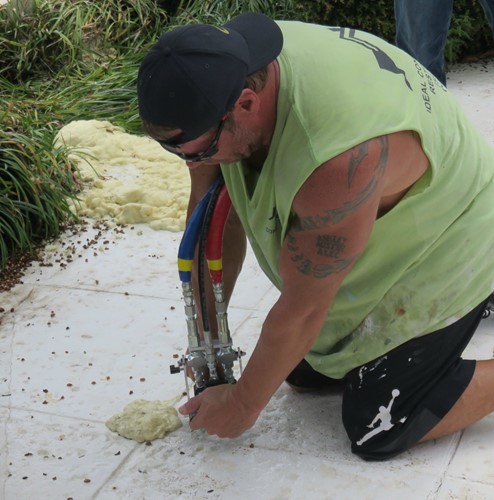 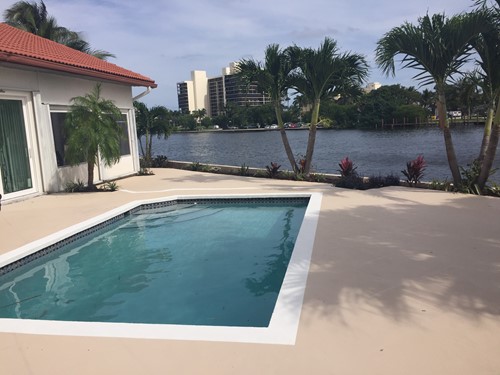