Sealing leaks in a hydro dam with Prime Flex 920

Problem: The Curtis Palmer hydroelectric dam in Corinth, NY, is more than 100 years old and had multiple leaks, both gushing and seeping. Some of the leaks were so bad, that the interior walkway used to cross the dam had become unusable.

“Some of the cracks were so large that we inserted break lines and shot grout through the break lines and mudded in part of it,” said Floyd Kraft, project manager with DeBrino Caulking Associates.

Solution: They used Prime Flex 920, hydrophobic, super low viscosity, water-activated resin that expands to form a closed cell, watertight rigid foam. The 920 was used with Prime Kat and Kick Fast Kat catalysts. The latter was used because the work was done in January 2014, and the water was extremely cold, so the crew needed to work as quickly as possible. How cold was the water? Only 19 degrees. As soon as the water stopped moving, like when it splashed on the scaffolding, it froze immediately. They used a patching material to do the mudding.

Outcome: As Kraft predicted, sealing the leaks has resulted in some new leaks springing in other locations, so he and his team will be back to tackle those (in spring 2015). The original leaks remain completely sealed.

A dam more than 100 years old in Corinth, NY, had leaks that needed sealing. Prime Flex 920 is used to seal a leaking dam in Corinth, NY 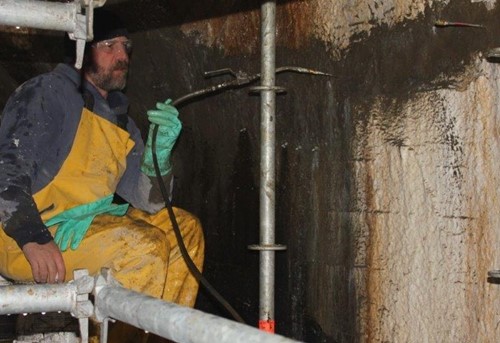 Prime Flex 920 is injected through ports to seal leaks in the Curtis Palmer Dam. 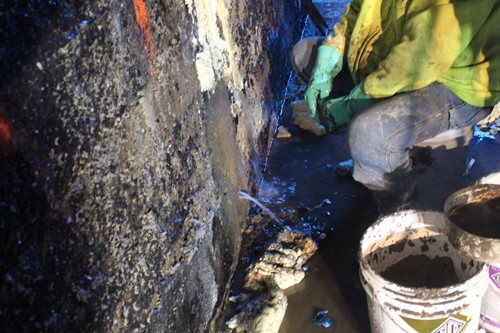 The Curtis Palmer Dam in Corinth, NY, had gushing and seeping leaks.

Curtain grouting a high-rise basement in the Bronx - AR 800