Sometimes the fourth time is the charm. Such was the case with a major wastewater treatment facility construction in Queens, N.Y.

Flushing Bay is located in Queens, N.Y., off the East River between LaGuardia Airport and Citi Field, home of the New York Mets. Up the Flushing Creek a few blocks and adjacent to the USTA Billie Jean King National Tennis Center sits the Flushing Bay Combined Sewer Overflow Facility. Constructed over several years and completed in 2009, the facility stores 43 million gallons of sewage beneath a recreation center and playing fields.

Injection of polyurethane grouts played a key role in the successful excavation of the 80-feet-deep, multi-acre pit.

Problem
Washouts and construction delays plagued the excavation due to leaks in the concrete support caissons. Some context is needed to explain the exact nature of the problem and its cause.

Background
Concrete caissons were poured to stabilize the soil and create the perimeter around the excavation. These caissons were formed by, first, drilling a row of deep holes around the eventual perimeter of the pit. Next, placing steel I-beams vertically inside each hole. Then, filling each hole with concrete.

Excavation crews then removed the soil layer by layer at the rate of about 25 feet per layer, exposing the wall of concrete columns. In order to properly support the pit walls, crews installed tieback anchors to stabilize the caissons. They drilled holes between the caissons and cement deadmen that were grouted in the soil outside the planned pit perimeter. Next they installed conduit sleeves in the drilled holes and pulled post-tensioned cables through. They attached and tensioned the cables to bracing beams known as walers that were welded to the I-beams within the caissons.

Before the installation of the tiebacks was complete, however, problems emerged. When the pit got approximately 25 feet deep, below the level of the surrounding groundwater, water began leaking through and around the conduit sleeves into the pit. Some of the leaks were severe, gushing as much as 50 gallons of water per minute. In some places this made it impossible to continue welding the cable bracing beams.

Leaks through the tieback anchors used in excavation of an 80-ft-deep pit for the Flushing Bay CSO prevented welding. Note the water streaming from the lowest row of anchor plates. The leaks were ultimately sealed with Prime Resins polyurethanes.

Third time was not the charm

The general contractor hired a repair company who tried using cement grout to stop the water. That quickly failed. A second company was hired who tried a different grouting method. This too failed. Then a third company tried yet another method, but also could not stop the gushing leaks.

This left the general contractor in a tight spot. His project was delayed, the pit still leaked, and he had wasted time and money on repairs that didn’t work. So, the site engineer from Malcom Pirnie (now Arcadis) called Otto DeJager of Infrastructure Repair Service in New Jersey. Upon visiting the site, DeJager assured the GC that a crew from Infrastructure Repair Service could seal the leaks with no problem. “Good luck,” said the GC’s rep unenthusiastically. 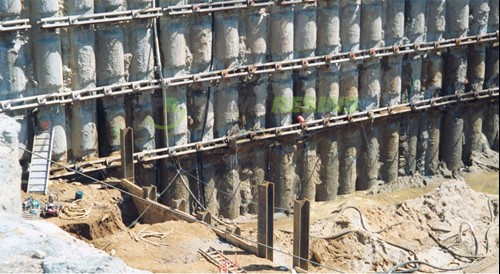 DeJager decided that the most effective solution was to use Prime Flex polyurethanes from Prime Resins. He knew that on a difficult job, quality and service were important. DeJager based his decision on his own track record of more than six years using Prime Resins products that performed exceptionally every time, coupled with the knowledgeable technical services staff at Prime Resins.

How they did it

For the gushing leaks, crews from Infrastructure Repair drove 10-foot-long sections of 3/8-inch pipe back into the conduit sleeves as far as they could toward the deadman. In some places they had several pipes joined together to go back as far as possible. They used the rod essentially as a giant grout needle and injected Prime Flex 920 behind and into the sleeves. The 920 reacted with the water present and expanded to form a hard, watertight mass that sealed the sleeves.

In places where the water flow was too great, technicians used sections of hose as relief tubes, then packed the area around it with activated oakum. This is oil-free jute rope saturated with Prime Flex 900 LVSF (now 900 XLV), a hydrophilic polyurethane grout. The activated oakum technique sealed the gaps between the end of the sleeve and the anchor plate attached to the waler. They then went back and injected the relief tubes and any remaining gaps in the tensioning assembly with the 900.

“For a permanent seal I always inject 900 XLV,” says DeJager. “It makes a nice, flexible plug.”

While this all sounds relatively simple when boiled down in writing, experience and improvisation played a major role. Also, there were times when the repair work was complicated by needing to be done hanging from a basket as much as 80 feet into the pit.

The GC called in the Infrastructure Repair crew as needed throughout the pit excavation and completely sealed all the leaks. This prevented further washouts and allowed welding work to resume. The tank occupying the excavation site is now underneath the Al Oerter Recreation Center and several playing fields.

Leaks through the tieback anchors used in excavation of an 80-ft-deep pit for the Flushing Bay CSO prevented welding. Note the water streaming from the lowest row of anchor plates. The leaks were ultimately sealed with Prime Resins polyurethanes.