Sealing a manhole with chemical grout

Sinkholes had developed around storm drainage manholes in grassy areas of a military housing subdivision in Richmond, Virginia. Besides being unsightly and a nuisance for lawn maintenance, these sinkholes posed a danger to kids playing in their neighborhood. In addition, housing officials worried that the erosion causing the sinkholes might stretch under nearby roads, which could cause sinkholes there as well. Another contractor previously attempted to fix the problem by injecting some sort of cementitious fill behind the manhole. That fix lasted less than a year. 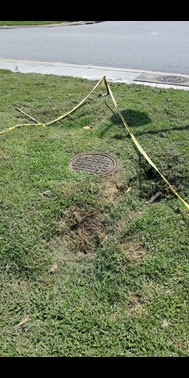 Identifying the source:  To pinpoint the sources of the problem, the contractor’s crew flooded the existing sinkholes and monitored the dry manhole to see where the infiltration entered. It was clear from accumulated sediment that some infiltration had occurred where the manhole barrel meets the bench; however, the flooding showed multiple additional infiltration points further up the structure. There were a few leaking cracks, but the connection of the inlet pipe from the surface catch basin and the connection of the storm main near the benchwere the sources of most leaks. These connections have brick aprons that have been surface sealed. There were no rubber gaskets (boots) present. Water leaked between the bricks through cracks in the surface seal. 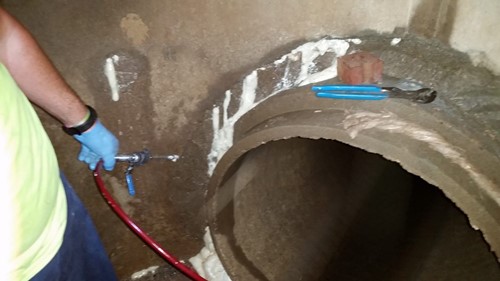 They installed four injection ports per pipe and injected each leak location starting at the lowest point and working up. This revealed a leaking injection hole from the previous repair attempt. Some 920 seeped out this hole and sealed it as well. The technicians repaired wide gaps around the main connection plus spalls and chips inside the collar using the activated oakum technique. They soaked oil-free oakum with Prime Flex 900 XLV and pushed it into the gaps where the reacted resin sealed the openings. The 900 XLV is a very low viscosity polyurethane and is hydrophilic, so it creates a tenacious bond with the wet concrete.

The crew tested their repair by flooding the sinkhole again. No water drained into the manhole: their repairs stopped the infiltration. Finally, they removed the ports and plugged the holes with hydraulic cement.

The contractor completed repairs with about eight gallons of material at less than half the cost of the failed repair.