A major U.S. high-tech corporation has a full-service manufacturing campus in N. Charleston, S.C. Inside one of the campus facilities, a section of utility trench was experiencing groundwater infiltration.

The 12-feet-deep, 10-feet-wide trench is built with expansion joints, allowing for movement of the 26-inch thick floor and 18-inch thick walls of the trench to accommodate thermal movement, vibration and seismic activity. Imagine a three-sided box culvert with a removable metal top.

Groundwater infiltration plagued one particular section of trench. North Charleston sits on a peninsula between the Ashley and Cooper rivers, tidal rivers that flow into the Atlantic. The low elevation and high water table, particularly at high tide, create significant hydrostatic pressure. The original joint seal system failed due to the hydrostatic pressure. Three expansion joints, with dowel bars, ranging from 2 to 5.25 inches wide were the source of the infiltration. In some places, as much as 4-6 inches of water stood in the trough.

The problem left unaddressed would increase stormwater runoff and therefore increase the cost to operate the facility.

Prime Resins provided on-site technical support to ensure all went smoothly with the project. Technicians from a local contractor experienced in chemical grouting already conducting work on site removed the old, ineffective joint seal system and sandblasted the joint to remove any existing adhesive and to give profile to the surface for the best adhesion of new material. They did not have to dry the trench and joint since the material is water-activated.

The team proceeded to curtain grout the trough with Prime Flex 920, a hydrophobic polyurethane resin that reacts with water present and forms a watertight, rock hard mass. The 920 filled any voids created by the infiltration and slowed the steady flow of groundwater so that Prime Flex 900 MV could be installed. The trench floor concrete is 26 inches thick and sits on a 2-inch thick mud mat. They injected 920 underneath the mud mat.

To fill the joints, they cut 6-inch backer rod approximately in half with each portion creating a form on either side of the joint. This created a barbell shaped void. They used a grout needle and injected the void between the two sections of backerrod with Prime Flex 900 MV, twin streaming the resin with water to ensure optimal reaction and uniformity of foam. Prime Flex 900 MV is a hydrophilic polyurethane resin that reacts with water. Its hydrophilic nature enables it to draw into the pores and any defects in the concrete, creating a tenacious bond.The barbell shape of the cured foam allows for greater elongation to accommodate joint movement. 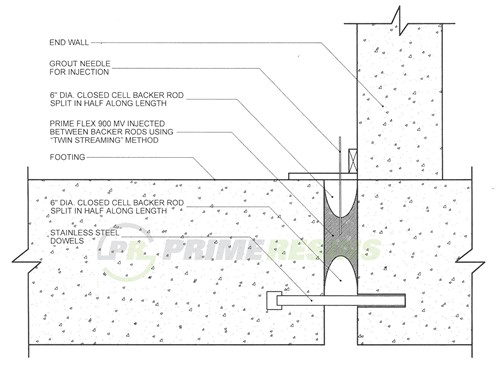 The two-part procedure worked beautifully. The 920 cut off nearly all the water infiltration and the 900 MV finished sealing the leak while allowing for movement of the joint. The crew completed the work in roughly five days over the course of three weeks. Production was not affected.

The very nature of the job was a challenge. The toughest part? The job specification required the crew to mechanically remove the existing expansion joint material. They had to sandblast the walls of the joint on a heavy equipment path in active operation.