Problem:  Anyone who takes the Voyage to the Falls Boat Tour on the Ontario side of Niagara Falls goes through a 195-foot-long, 12-foot high pedway tunnel from the elevators to the boat launch. Chances are that if you’ve been on that tour in the last 20 years, you have been dripped on due to multiple cracks in the 20-inch thick concrete ceiling and walls. There were many previous attempts to seal the leaks with chemical grouts, injecting just about every year. Dynamite Contractors, not the previous contractor, was called in to see if they could seal the leaks once and for all.

Grouting a crack that has been injected before can be more problematic than a standard leak repair. This was definitely the case for this job. Based on visual inspection of the site, it appears that the problem with the previous repairs was both the choice of materials and the installation method.

Upon removal of the cementitious surface material, grout technician Bruce Parrott discovered different styles of injection ports still in place that had simply been cut off flush with the patch material. Based on what could be seen with the surface material removed, it appears that the previous contractors had:

Problems were numerous. When the crack got very tight, it was easier for the resin to follow the path of least resistance, which resulted in resin flowing between the concrete and the patch material in some places. Not enough material got into the crack, and it is likely based on the ports present that too little pressure was used to force the resin deep enough into the concrete. Upon inspection of the old grout, it was clear that a hydrophobic material had been used. The cured material could easily be peeled off by hand because of the poor bond with the concrete. Hydrophobics repel water in a crack, and the water will act as a bond breaker between the polyurethane foam and the concrete, resulting in low bond strengths. Hydrophobics are not well suited for crack injection.

Learn more: Hydrophilics vs hydrophobics – Which to use and why

Parrott’s procedure:Solution:  Dynamite Contractors injected Prime Flex 900 XLV under high pressure with a Titan airless pump to seal the cracks. The 900 XLV is a super low viscosity, hydrophilic polyurethane resin that reacts in the presence of water. The other reason a hydrophilic resin was chosen is for its ability to accommodate thermal expansion and contraction.

1- After removing the surface material, Parrott had to remove the old ports.

“There were places the ceiling looked like Swiss cheese from all those port holes,” said Michael Vargo, senior technical consultant, who was on site. “The old holes were additional paths for resin to travel, so you end up having to plug many holes in addition to the original crack.”

2- Next, starting further away from the original crack, Parrott angle drilled deeper into the crack to get above the old material to create a ceiling of grout. 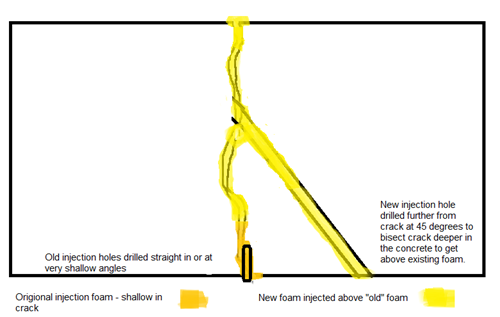 3- He pumped approximately 20 gallons of material to seal 160 linear feet of cracks. At times, the pressure of the new material being injected would blow out a weakly bonded plug of the old material.

4- He dressed out the ceiling: removed the ports, plugged the port holes with patching material, surface coated the treated areas with polymer-modified cementitious material in preparation for painting.

All told, Dynamite spent five days on site for preparation, injection and dress out to finally fix a problem that had plagued the park authority for years.

Outcome:  Success. Parrott went back within two weeks and confirmed that all the repairs were dry. After several weeks, all remained dry and the results have far exceeded previous attempts. 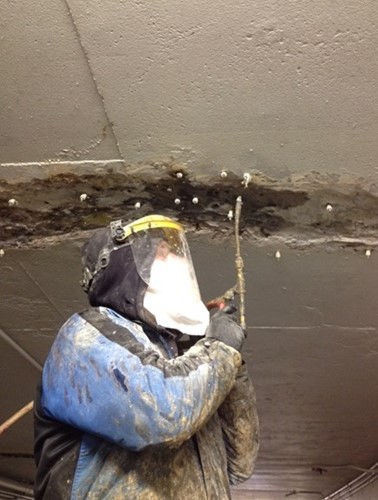