The City of Tallahassee had a problem with one of its streets running over a box culvert at Black Swamp. Following several heavy rainfalls, a dip in Park Avenue developed. Eventually the depression grew so pronounced that it became a traffic hazard.

City crews attempted to fix the problem several times using different methods, including replacing a section of pavement and its subgrade, and chemically grouting the culvert joints with an epoxy-based grout. These repairs did not work, however. Settlement of the roadway continued. Officials suspected that the culvert joints were leaking, so they considered completely removing the roadway to expose the box culvert. This option was very expensive and difficult. The factors included:

The city subsequently hired Environmental and Geotechnical Specialists Inc. to pinpoint the cause and provide emergency design and repair services that, if practical, did not involve reconstructing the roadway. EGS conducted a subsurface investigation, which included boring holes along the centerline of the road and installing temporary piezometers to measure the groundwater. Based on a series of piezometer measurements, it became clear by the drop in groundwater measured that groundwater was, in fact, leaking through the joints in the culvert and the control weir.

Consequently, EGS and the City of Tallahassee developed a plan to seal the leaking joints and fill the resulting voids along the culvert and weir sidewalls from inside of the culvert. The erosion around the leaking joints was the cause of the sinking pavement. Four main factors contributed to this decision:

The repair had two phases. The first phase was to install a series of equally spaced holes at each joint through the culvert flange into the seal. A small injection port was installed in each hole and surface sealed. Prime Flex 900 XLV, an extremely low viscosity hydrophilic resin, was installed under pressure until it was observed exiting the adjacent port. 900 XLV reacts with water and expands to form a closed cell, watertight foam. In addition, this product complies with NSF/ANSI Standard 61 for contact with potable water. The process was repeated until all the injection ports at each joint were grouted.

In phase two, the crew identified and filled existing voids around the culvert. After grouting all the joints, they drilled small holes through the culvert sidewalls to identify and map the voids. Next, the crew installed injection ports in the culvert and weir sidewalls, and filled the voids with Prime Flex 910, an expansive, hydrophobic polyurethane that reacts with moisture to form a rock hard, watertight mass. Foundation Professionals of Florida out of Lake City, Florida, was the contractor. In addition, Prime Resins provided on-site technical service and manufacturer’s representation throughout the grouting phases. 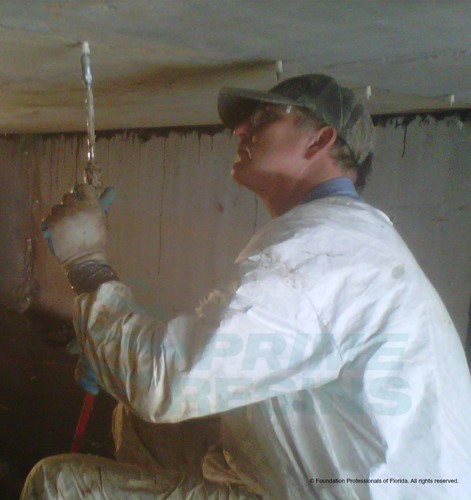 After grouting, contractors measured groundwater levels with the piezometers to identify whether a drop in the groundwater table at the culvert or weir was still present. They found no decrease.

Thirty days after the repair, the culvert and weir were inspected for leaks. Four minor weeps were detected, and these were grouted shut with 900 XLV. The structures were re-inspected after another 30 days with no signs of seepage or staining.

Foundation Professionals sealed the leaks and settlement of the road stopped.

Several benefits resulted from the City of Tallahassee’s willingness to consider chemical grouting as a repair option. These included: