A polyurea coating seals a fountain at the centerpiece of Piazza d’Italia, a prominent attraction in downtown New Orleans. 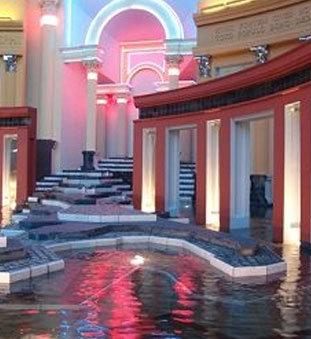 A polyurea coating seals a fountain at the centerpiece of Piazza d’Italia, a prominent attraction in downtown New Orleans.

The Piazza d’Italia is a prominent attraction on Poydras Street in downtown New Orleans. It is a monument to the Italian-American community’s contribution to the city. The piazza was designed in 1978 by renowned architect Charles Moore and became a symbol of late Post-Modernism. A sprawling fountain with two pools and waterfalls is the central feature of the attraction.

The Piazza d’Italia needed renovation. One of the issues: The fountain was leaking. The 6000 square feet of pools needed to be sealed and waterproofed. 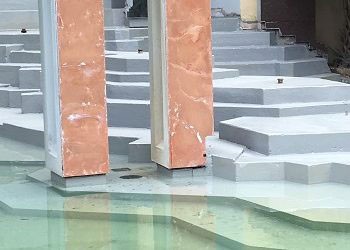 An experienced concrete restoration contractor was hired to seal the leaking fountain. He ultimately selected Prime Guard 7000 spray-applied polyurea to seal the fountain.

The contractor was working with his Prime Resins technical consultant on other projects, so they explored solutions for the problem. The contractor had used Prime Guard 7000 for some sewer applications that worked well, so he wanted to try that.

The fountain has a lot of stairs so there are a lot of corners to go around and underwater lighting fixtures that had to be sealed off. In addition, there are cobblestones and marble bonded to the pool surfaces.

The pools were drained, the cobblestones and marble were removed, and the remaining surface was prepared for coating. The contractor sprayed the polyurea on about 6000 feet of the stair-stepped pools and fountains. After that was finished, the polyurea surface was prepped, a new fountain liner was installed and water tested, and stone masons used an epoxy bonding agent to reattach the cobbles and marble. 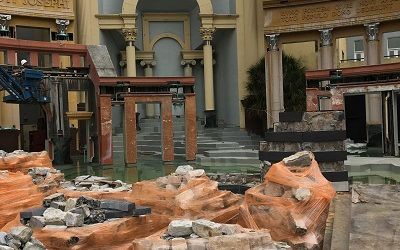 The project was a success. The water test prior to completion proved the fountain no longer leaks. The contractor used six drum sets of material applied at 100 mils.

The client looked at another type of red liner, perhaps roller-applied. They were worried about the many outside corners not getting sufficient coverage. The contractor rounded the corners with a diamond blade, they filled the inside corners, and applied detail coats to thicken the coverage in points of concern. 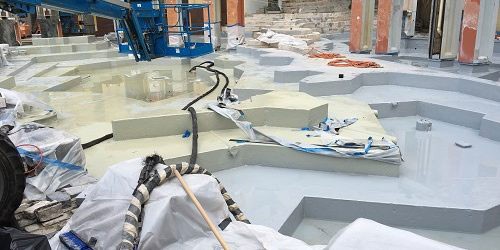