Problem: The project was at the new construction of a liquid natural gas (LNG) terminal in Sabine Pass. The concrete contractor needed to stop leaks in the pit so a special overlay material could be installed on the floor. The function of the pit is in case of an emergency or maintenance they can empty some of the piping carrying the natural gas into this pit. Being heavier than air, the gas would settle into the pit and would trigger fans and foam tanks to place a layer of foam over the natural gas, containing it within the pit. Since compressed natural gas is extremely cold, the pit would receive a special concrete layer to prevent damage to the structural concrete.

The floor slab is 4+ feet thick and sits on a six foot thick mud mat. The facility is on the shipping channel, so the ground water table is quite high. Water was getting between the mud mat and structural slab, creating uplift and cracking off the slab. The hydrostatic pressure was so great, that when holes were drilled for grout injection, water shot up six inches.

In addition, water was leaking in around the perimeter horizontal joint where the walls met the floor slab.

Hydrostatic pressure was such that water shot up 6″ when holes were drilled through the concrete to underseal the pit. (Photo copyright of Prime Resins, Inc. Not for reuse.)

Added challenge: The ambient temperature in the pit was above 120°F. In addition to the obvious worker health safety issues, it meant that measures had to be taken to keep the material from reacting too quickly. Heat will accelerate the reaction of the polyurethanes and lower their viscosity. The amount of catalyst was reduced for the 920 to counteract the heat effect and all the products performed perfectly despite the heat. 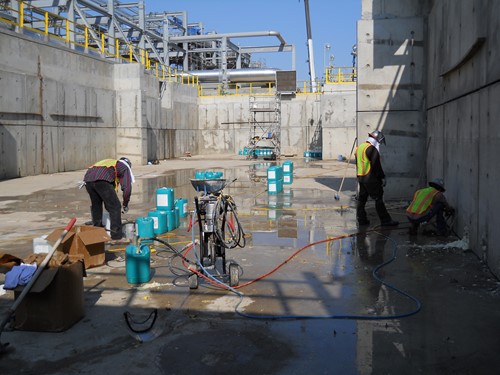 Horizontal joints of wall to floor were sealed with Prime Flex 900 XLV polyurethane resin.  (Photo copyright of Prime Resins, Inc. Not for reuse.)

Sealing pipe penetrations with Hydro Gel SX prior to lining